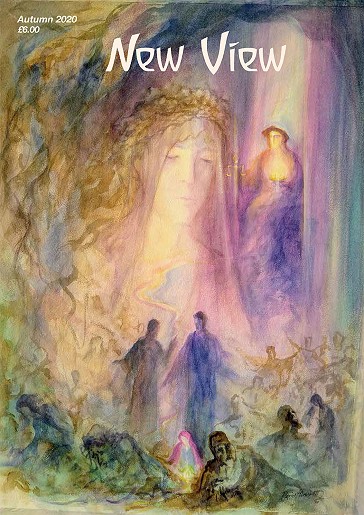 Welcome to the Michaelmas issue of New View, at a time when, in the Northern hemisphere, the season turns towards Winter and nature sheds much of her outer garment, with leaves falling to mulch and feed the earth for a new Spring to come. Of course, across the world in the southern hemisphere a new Spring now beckons.

There is this seasonal lemniscate, crossing the equator, a weaving natural rhythm that connects us all to nature and the festival impulses embedded in its course through the year.

Michaelmas, as a festival, is still in its infancy, still needing to be better understood as to what its quality means for human beings. Rudolf Steiner spent a great deal of time and inner effort bringing an awareness of the being and purpose of ‘Michael’. Whilst this is but a name, taken out of Christian tradition, that locates our thoughts towards such a being – and no doubt other cultures and pathways might have another name to identify the workings of such a being, who, after all, according to Steiner, is the Time Spirit, the Spirit of our Age – the character (if I can put it that way), gesture and motifs that are connected with this spiritual being give rise to the term that Steiner coined (in his native German of course) ‘Michaelic’. Deeds are very important to this being; things need to be done! I suppose a Michaelmas festival has a strong motif of firing the will, inspiring necessary deeds in the world, invoking courage. And what a world we have right now.

The creeping oppression in the name of ‘health and safety’ (terms I do not in any way deride in their essence) needs to be met, with real conscious deeds. But, as ever, one needs to be well informed in order to act well. To that end, as Editor of New View, I have constantly added pages to the last three issues (Spring, Summer and now the Autumn issue) to help bring about as much perspective for this time as possible towards the reader, whilst finding space for balancing articles connected to the inner life.

And so this particular journey though the Autumn issue begins with Covid-19 and ‘The Great Reset’ by Richard Ramsbotham. As he wrote a very long piece we have decided to separate it into two articles, but make them both available in this current issue. In many ways there is something of an outer and inner gesture to the ‘bookends’ that Richard brings to this issue (for he is indeed the author of the first and last articles). In the opening article, he looks into events, and personalities active in them, happening across the world with particular reference to the forthcoming USA presidential election.

This is followed by Douglas Sloan, writing from New York bringing an overarching view of Christ and what that means for our time with The Christ Impulse in the Age of the Consciousness Soul. It is a long article for a magazine, as a number of the current contributions are in this issue, but this is because I take very seriously the bringing of sufficient context for the reader to be able to engage with the themes that are being shared. And, of course, we are not a newspaper, so the reader has time to read and digest before the next issue, at Christmas.

And there is much to digest in Facing Evil, Standing Tall by Benjamin Cherry, writing from Taiwan, which in many ways complements Douglas Sloan’s article – and, indeed, the whole mood of this Michaelmas issue.

The vexed issue of masks is looked at by the scientist Peter Taylor in Masks – what they show and what they conceal. Here the reader is invited to carefully work through the science to come to a more objective understanding to this particular imposed measure in the wake of the coronavirus situation, a situation that is given deeper context by Terry Boardman with Into the New Normal? – Part II.

This is followed by A reader’s experience of lockdown from Anne Byrne, writing from Scotland.

Being pregnant in an age of compliance: Thoughts on healthcare, safety and freedom finds Maria Lyons writing, also from Scotland, raising concerns about this threshold of motherhood revealing some resonance it has, within the medical context, with the current ‘crisis’.

A great problem, especially here in the West, is a lack of real connection and understanding of Death, which creates a fear that stalks the land at present. Wendy Teall addresses this in a very personal way with Are we squeezing the life out of death? and illustrates her contribution with her own creative artwork.

There follows, also, a personal sharing by Matthew Barton in his moving piece, looking into life, with The Well of Real Water.

Boyd Collins writes from the Philippines on LSD in Is the Mind a Spiritual Entertainment System?

An interview then follows between Jonathan Swann and Richard House in Administration and the Waldorf School: Questions of Managerialism and Collegiality.

Which finally brings us to the closing ‘bookend article’ of Richard Ramsbotham with A Michaelmas Article – Part Two: What on Earth are we to do about it?, which looks to a more inward awakening for moral action in the world.

On that note, I once again thank the readers for their continued support; with the huge drop in advertising revenue (even the national press had to be bailed out somewhat on that score by the government… but not New View it seems!) that is what is keeping us afloat.

Wishing you the reader well, wherever you may be,