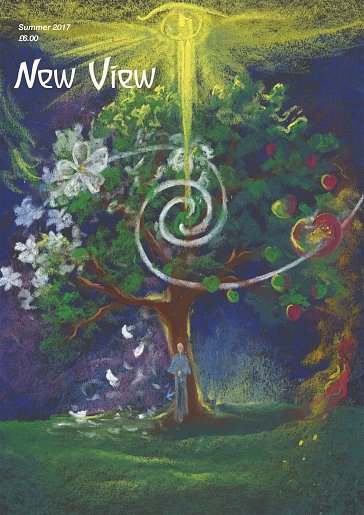 Welcome to the midsummer issue of New View (midwinter in the southern hemisphere). This particular issue is a small milestone for me as editor, being the 75th issue that I have personally edited and produced.

New View began life at Michaelmas, 1996. I became its editor on 13th November 1998 and set about producing my first (and the magazine’s 10th) issue that Christmas. In those days it was an in-house magazine for the Anthroposophical Society in Great Britain (ASinGB).

At the interview stage for the post (the previous editor having moved on and I having returned from working with an anthroposophy-inspired magazine in Germany) I stated that I was not interested in an in-house magazine but wished to take Steiner’s work and what it inspired in contemporary people and initiatives and make it better known to a wider public, not confining it to the UK but making it available across the English speaking world. I also wanted to make more visible and understandable, through the pages of the magazine, esoteric christianity and the elemental world, as I felt knowledge and experiences of these were rather neglected and yet they so deeply underpinned the journey and development of the human being. My vision, as such, was accepted and I become the magazine’s new editor.

By 2004, the then council of the ASinGB had decided it no longer wished to continue funding the magazine and gave a generous grant to enable it to be set up as an independent initiative. And so New View Publications Limited was created to carry the magazine forward. This current issue of the magazine also sees the completion, in July this year, of a ‘lunar node’ (a phase of some 18 years, 7 months and 22 days) for my tenure as editor. A time of personal reflection for me and reacquaintance with the concordance of inner and outer events which brought me to do this work in the first place. It has felt more of a vocation than a job; particularly since from 2007 onwards we have had to seriously fundraise to keep the magazine going and pay two people to work on it.

How has the development of my original vision and intention for the magazine been during this lunar node period? Certainly not quite as I imagined. I had hoped that New View’s circulation would have given it financial stability. Although we are read in over 40 countries (albeit in small numbers), we still have to fund raise, year on year. But over the years New View readers’ generous donations have made the difference, enabling us to continue. Well over 300 different authors have been published in the magazine these last two decades and a number have explored and spoken of esoteric christianity and the elemental beings. One theme though has never really been well explored and I feel that without an awareness of this context relationships between nations will never be well understood, so I now renew a request for well written and researched articles on the folk souls and folk spirits!

I mentioned that many authors have been published in New View and it is with a certain sadness that I inform readers of the death of one of them, Paul Emberson, in January this year, aged 73. Paul was the guiding light in bringing about and developing the Anthro-Tech initiative and he contributed a number of articles to New View over the years on their research into moral technology and harmonic resonance based on Steiner’s indications. We also reviewed several books Paul wrote on the subject. I am sure many readers will join me in thinking well on him on his new journey.

It is with Rudolf Steiner that we begin this issue, with a lecture he gave in the Summer of 1908: Phantoms, Spectres and Demons. An insight and reminder of what our actions bring about. This is followed by Meditation by Charles Kovacs.

Searching for Lemuria continues Maarten Ekama’s series of articles looking at historical developments for an understanding of the evolution of the Earth. Judyth Sassoon complements this with Archetypes, Ancestors and Novelty in Evolution: An experiment in collaborative research.

Terry Boardman then takes a look at Individual – Nation – World: A Brief Overview; a beginning towards a better understanding of the interactions between people and peoples that we are all a part of.

We then learn of an event in China concerning Steiner’s educational impulse in the East in NNA News around the World compiled by Christian von Arnim.

Charles Kovacs then reappears with The Midsummer Festival giving a deeper insight into the meaning of this time of year.

From Germany, Prof. Heinz Buddemeier completes his series on music with Music in the Grip of Technology – Part III. The Smartphone: Music in the Virtual World.

Mark Kamp then shares a very personal account of events in his life that I readily encouraged the publication of in New View as it may be of help to many readers: Spiritual Emergence – Spiritual Emergency; A personal journey. I would welcome feedback from readers on anything published in New View, but particularly this article.

Writing from the USA, Andy Shaw makes a plea for personal authenticity in Learning to Play the Violin: Understanding Rudolf Steiner in the Information Age. This is followed by Hermann Hesse and Anthroposophy by Wolf Forsthofer, a piece that highlights many issues of historical interest that resonate today.

Finally, Trevor Dance offers a glimpse into the artistic journey with An Auspicious Meeting.

I warmly invite you, the reader, to continue supporting New View and what it brings into the world and wish you well, wherever you may be.